Even though ants are extremely interesting creatures, sometimes there’s just too many of them. One of the best examples is the Red imported fire ant (Solenopsis invicta) in the United States. This ant was accidentally introduced from Argentina somewhere around the 1930s, and has gone on a rampage since then. In Argentina they had plenty of enemies to keep them in check, but these enemies don’t live in the US, allowing the ants to spread without much resistance. This effect is known as ‘enemy release’.

The ants themselves are quite small, but they are extremely aggressive. They don’t only compete with the local ants, but they also invade buildings and sting people, which can result in an allergic reaction and if you’re very unlucky, even in death. All in all they cost billions of dollars every year to the US.

So…what can we do about them? Researchers have been trying hard to find ways of getting rid of this ant, and one of them is pretty promising…but also quite gruesome! 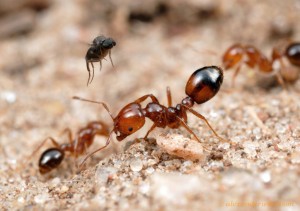 This fly injects an egg into a Fire ant. This egg will hatch into a larva, which will migrate to the ant’s head, after which the head will fall off. The larva will then eat the insides of the head and use the head capsule as a pupal case. Afterwards it will turn into a fly, ready to complete the circle.

Scientists have been bringing these flies to the US to fight the spread of the ants. Exactly how efficient they are at keeping these ants at bay is not known yet, but the flies seem to have no problem in establishing themselves, meaning they are definitely doing their job!

This entry was posted in Ant science and tagged Fire ant, parasitism. Bookmark the permalink.