We need a new house…fast!

Posted on December 4, 2013 by antyscience

Many ants live in relatively stable conditions. They have one nest which they will call home their entire lives. Some ants however are less lucky!

Some very small ants live in acorns (yes, one entire colony in 1 acorn). Other ants, such as Temnothorax albipennis live in rock crevices. Both acorns and rock crevices are not the most stable of environments, and get destroyed, exposed or flooded very easily. Because of this these ants have to move the entire nest multiple times during their lives.
However…how do they decide on where to move? 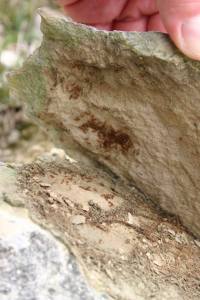 Temnothorax albipennis in a rock crevice in Dorset, UK. Picture by Nigel Franks

These ants have so-called scouts that go around finding suitable nesting places. Once they find a nice place, they will start to recruit other individuals. Once enough ants are recruited that all agree on the quality of the house, a threshold is reached and the colony will move to the new house.

The ants take a lot of characteristics into account when deciding which house is nice and which one isn’t. For example, they prefer dark cavities and small entrances, and are normally able to always choose correctly when given the choice between a good and a bad house. However…what happens when the ants are in a hurry?

When their house suddenly gets destroyed, the ants have to make haste in finding a new house, as it’s extremely dangerous for them to be outside. In this case, experiments have shown that the ants will make ‘errors’ and will also move to bad houses. After they have settled down they might still move to the good house afterwards, but the fact that they have to hurry, makes them adjust their vision of which house is ‘acceptable’.

This shows very nicely that ants can base their decisions not only on intrinsic ‘rules of judgement’, but that these rules can be broken, depending on the situation.

This entry was posted in Ant science and tagged house hunting, temnothorax. Bookmark the permalink.