The normal story about ants tells us that a colony is headed by one or more queens, who do all the reproducing, while the workers are sterile and do everything except reproducing.

Of course, there are always exceptions in nature, and in some ants, such as Pachycondyla inversa, not all workers do their job. Ant workers are kind of degenerate females that, instead of working, can activate their ovaries and lay unfertilized eggs. Due to a fascinating genetic sex-determination system in ants (and other Hymenopterans such as bees and wasps), these unfertilized eggs will grow into males. 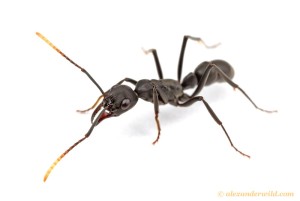 Now, a conflict of interest arises within the colony, where not every ant wants the same thing. The queens wants the workers to work, while she takes care of the reproducing. For the colony as a whole this is also the better option, since this increases overall egg production, and thus everyone’s fitness. However, individual workers would rather lay their own male eggs and sneak in a couple of their own genes to the next generation. Therefore, the workers wouldn’t mind laying their own eggs, but they wouldn’t want other workers to lay eggs. A tragedy of the commons is born.

Luckily, the ants have found a solution to battle this ‘illegal male-production by workers’, as it greatly reduces colony efficiency when a lot of individuals are reproducing instead of working. The solution comes in the form of…police!

Police workers will go through the colony and smell the eggs. If the eggs are laid by the queen, they accept them, but if they are made by a worker, they will eat the egg. Furthermore, these ‘police-ants’  attack workers that secretly laid eggs. This makes laying eggs a less attractive option, and might make the workers actually work instead, increasing the efficiency of the colony. Because if everyone was reproducing…who would do the work?

This entry was posted in Ant science and tagged pachycondyla, policing. Bookmark the permalink.